The final part of the Sasuke 32 Live Preshow from July 2nd, 2016, the day before Sasuke 32 aired. In this part, we take calls from TCM and elephant52. There were some technical issues during the livestream. Those sections were edited out of the recorded versions.

Part 4 of the Sasuke 32 Live Preshow from July 2nd, 2016, the day before Sasuke 32 aired. In this part, we take calls from ANW competitor Mike Bernardo and Rich from the Armchair Ninja Podcast. There were no technical issues during this part of the livestream. So nothing was edited out of this section.

Part 3 of the Sasuke 32 Live Preshow from July 2nd, 2016, the day before Sasuke 32 aired. In this part, we take calls from Emily and more. There were some technical issues during the livestream. Those sections were editED out of the recorded versions.

Part 2 of the Sasuke 32 Live Preshow from July 2nd, 2016, the day before Sasuke 32 aired. In this part, we take calls from Arsenette and Alex. There were some technical issues during the livestream. Those sections were edited out of the recorded versions.

Part 1 of the Sasuke 32 Live Preshow from July 2nd, 2016, the day before Sasuke 32 aired. In this part, we take calls from both yamfriend and Badalight. There were some technical issues during the livestream. Those sections were edited out of the recorded versions.

Take a look at "Broken" William surprising Sister Arsenette with his wonderful intro for episode 20 of the Podcast of the Final Stage!

Email ThisBlogThis!Share to TwitterShare to FacebookShare to Pinterest
Labels: Behind The Scenes, Final Stage Podcast

One year after Sasuke 1, TBS decided to bring back Sasuke and call it Sasuke 2! But they couldn't do it indoors again, they needed to move outdoors! So they packed everything on a truck (including the contestants!) and shipped them to Midoryama. So join us as we review Sasuke's first foray outdoors, Sasuke 2!

Final Stage Podcast Episode 19: Sasuke 1 Review: Back to Where it All Began (featuring Rich from Armchair Ninja Podcast)

Everything has to start somewhere, and Sasuke is no exception! For this episode we travel all the way back to 1997 and watch the very first Sasuke tournament. Back then, the course was indoors, the contestants were brand new to the course, and there were hardly any water pits. Join William, Arsenette, and our special guest Rich from the Armchair Ninja Podcast as we go back to where it all began and review Sasuke 1!

Also, we talk Team Ninja Warrior: College Madness, the opening of applications for both ANW9 and Sasuke 33 and we all answer your questions!

Before Ninja Warrior debuted on G4, ESPN began airing a different obstacle course show from the same people producing Sasuke at the time. That show was called Viking. With marine themed courses and many familiar faces, join William and Arsenette as they talk about the original, family and celebrity versions of Viking, featuring runs from Nagano, Yamada, Akiyama, Yamamoto, Sato, Komiya, HG, and even The Octopus! Now that I think about it, having The Octopus compete on a nautical theme obstacle course makes a lot of sense. No wonder he did better on that show.

Also, we talk about the finale of ANW 8, Esquire's Ninja Warrior marathon, and more!

With Sasuke 32 reviewed and in the books, there's only one thing left to do: talk about the obstacles! Join William and Arsenette as they break down the course and decide what they would keep and what should be destroyed.

Also, William updates on ANW, the return of Team Ninja Warrior and the National Ninja League, Sasuke's return to US TV, and we answer your GLORIOUS questions!

Final Stage Podcast Episode 16: Sasuke 32 Review and Ninja Warrior Returns to the US!

Sasuke 32 has come and gone, but not everything is right in the world. We break down what happen with show and discuss what worked, and what didn't.

Also, we talk about the Ultimate Crazy Cliffhanger, American Ninja Warrior's Emmy nomination, the Olympics, sewage, William's AnimeNext panel, the new Final Stage, rain, Spartans, physics and more crazy things. And, oh yea, SASUKE IS COMING BACK TO THE US!

Sasuke 32 is almost here! Let's talk about it at great length! We talk about the new obstacles from Stage 3 and answer YOUR questions!

Also, William recounts the details of his very first panel and we tell you what time Sasuke is airing in your timezone!

Arsenette went back to Japan! William went to Florida! Only one of these statements is relevant to this podcast! Join us as we have extensive, spoiler free, preview coverage of Sasuke 32. We discuss who was there, what they ran on, and why certain things happened the way they did!

Also, we say a lot of really nice things about American Ninja Warrior's All Star Special and season 8 premiere!

Perry Oosterlee Has A Special Announcement Regarding Sasuke 32!

After my interview with him at the National Ninja League Finals, Perry Oosterlee let me in on a very special announcement regarding Sasuke 32!

Say, doesn't Sasuke take place on a mountain? We can talk about that as well. 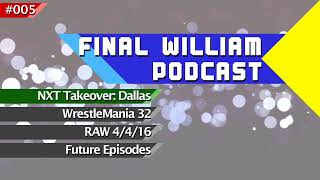 Sasuke Vietnam has recently started to tape and a plethora of international competitors are going to be competing! Join us as we discuss who's going. Also, we discuss the finale of Team Ninja Warrior, Ninja Warrior in the UK and put the National Ninja League to rest.

After all the runs were completed and all the interviews were conducted, there was one final thing I wanted to do. All weekend I stood next to the giant trampoline and kept thinking about how I really wanted to jump off of it and into the foam pit. So right before I left the Movement Lab, I decided to make that jump. And I had my camera with me.

The following is a collection of all the raw footage I recorded for B roll, mostly of the obstacles of each stage.

This is it! The Final Stage! Seven people remain. Whoever goes that farthest, the fastest wins it all. Who will be the first National Ninja League Champion?

Stage 2 is upon us! Twenty-Two men cleared stage 1 and now must take on a more challenging course with a strict time limit. How many people will reach the final stage?

The sixth and final group take on stage 1 of the National Ninja League Finals! Among the top qualifiers, how many will make it to stage 2?

With two thirds of Stage 1 already done, some of the best ninja competitors have arrived to take on the course. How many more will move on to Stage 2?

Group 4 of Stage 1 rolls on and some of the ANW names have started to appear! How many people will move onto Stage 2 from this group?

Stage 1 of the National Ninja League Finals continues! In group 3, we see some amazing performances, some close calls, and one amazing spill!

The National Ninja League Finals continue with Group 2! How many people will join the previous three clears in stage 2?

The first of six groups of competitiors to take on Stage One of the National Ninja League finals! Of the 142 people who competed, how many will move on to stage two? Throughout this series, you will get full coverage from the competition, featuring every run from the entire weekend.

For my final interview at the National Ninja League Finals, I talked to Perry Oosterlee, the only international competitor to compete. We discuss the many courses he competed on, his performance in the NNL, and his experiences in the USA!

The National Ninja League Finals was this past weekend. We both went. It was awesome! Join us as we discuss the experience in great length.

Also, we discuss applications being open for both Sasuke 32 and Sasuke Vietnam, the locations for American Ninja Warrior 8, and even more Team Ninja Warrior discussion.

ANW competitor and National Ninja League designer Luis Moço was nice enough to talk to William about designing obstacle courses, training, and life outside of ANW!

After two amazing saves on stage one, Jojo Bynum was nice enough to talk to me about the event right before stage two. In addition, we discuss his time on Team Ninja Warrior!

While at the National Ninja League Finals, Travis Rosen was nice enough to take some time to talk to be about the event and Team Ninja Warrior!

Michelle Warnky was nice enough to take some time to talk to me about ANW, Team Ninja Warrior, and the difficulties balancing work and training. Also, we discuss the challenge of competing in cold weather and even get a surprise!

I talked to the owner of the Movement Lab and organizer of the National Ninja League, Chris Wilczewski. We talk about how stage one was going so far, competing on Team Ninja Warrior, and that wild move he performed on the Salmon Ladder!

William gives a quick report from the National Ninja League.

Almost eight years after its initial recording date, never before seen footage from Test 3 of the Mercury Laboratories is revealed to the public for the very first time! 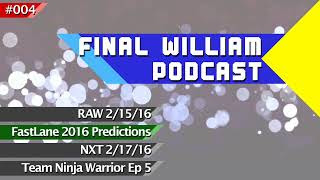 FastLane is this Sunday and the main event got a little more interesting!

The Fine Bros have hit a new milestone! A half million subscribers... lost! Truly an achievement worth documenting. 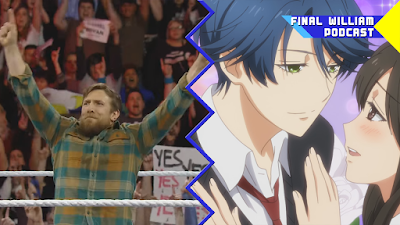 It was a sad week for wrestling fans. This past Monday, Daniel Bryan announced his retirement and William gives his thoughts on the matter.

Final William Podcast 002: Everything Is (Not) Fine 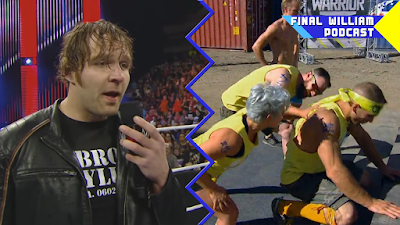 Insert a joke about reacting to things here because I discuss the Fine Bros controversy on this week's show. In addition, I discuss this week's episodes of RAW, NXT, and Team Ninja Warrior.

USA vs The World has finally aired! However, you probably didn't hear about from NBC. But, you may have heard about Team Ninja Warrior. Or maybe the National Ninja League? Perhaps you heard that England is getting new episodes of Ninja Warrior based on Sasuke Rising? And if you haven't heard of any of that, you can listen to our picks for Team Ninja Warrior Trios.

You did it guys! I'm so proud of you! 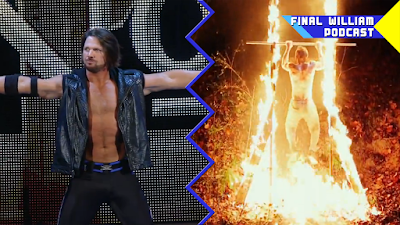 It's the series premiere of the Final William Podcast and William has a lot to talk about. The Royal Rumble is back to being good! Robot Wars is coming back! The Rock returned! The NXT No. 1 contender's picture is disputed! And Ian Dory naming his team Midoryama makes sense!

As time passes I feel myself begin to drift far, far away. No matter how hard I fight, I slip further into the darkness. I try to resist, but I cannot deny its sirens.

Happy new year, everybody! In honor of the new year, William and Arsenette discuss the new, upcoming show “Team Ninja Warrior”. Esquire secretly previewed the first episode and William watched the whole thing. Join us as William discusses the episode in depth with Arsenette. Did he like it? Well…

Also, the duo talks about Inui’s latest livestream, the competitors representing USA, Japan, and Europe in USA vs the World, the ANW entry deadline, the National Ninja League, and how someone can get away with claiming a Canadian is from France.