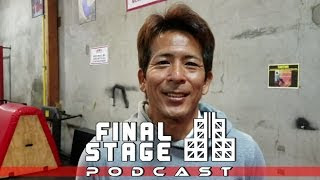 While at the National Ninja League Finals, Sasuke Grand Champion Makoto Nagano was gracious enough to record an intro for the last episode of the Final Stage Podcast! Huge thank you to Nagano for taking the time to do this for us! Also, make sure you stay until the very end of the episode for some bonus footage of Nagano!

What happens when you take a show like Ninja Warrior and give it a Hollywood budget? You get Netflix’s Ultimate Beastmaster. The gigantic obstacle course competition featured 108 competitors from 6 countries competing in a real life video game where only one can claim the title. Among those competitors: Kinnikun Nakayama and Yuuji Urushihara. Join William and Arsenette as they review the massive show!

Also, the National Ninja League Season 2 Finals happened and William met Makoto Nagano there! Join us as we discuss the weekend of events, who won, and who to look forward to in ANW 9!

And finally, this is the last episode of the Final Stage Podcast. Arsenette and William reflect on the past two years. Thank you so much for following us on this wild ride.