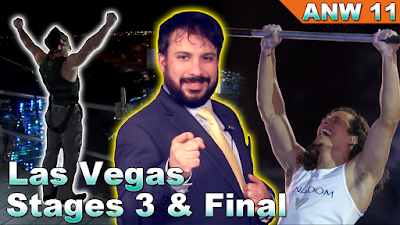 Season 11 of American Ninja Warrior has come to an end and there's a new champion! Join William as he discusses all the runs from Stage 3 and the Final Stage. What did he think of the new obstacles? Was he surprised by the results? And were there any shenanigans behind the scenes?

Correction: I misunderstood my source on one detail. The Pipe Dream was always in Stage 3. It may have been modified between the two nights but it was always there. There was a false rumor going around that I mistook as fact after talking to one of my sources. Apologies for the misunderstanding. I will try to not do it again.
Posted by 2D2Will at 12:30 PM